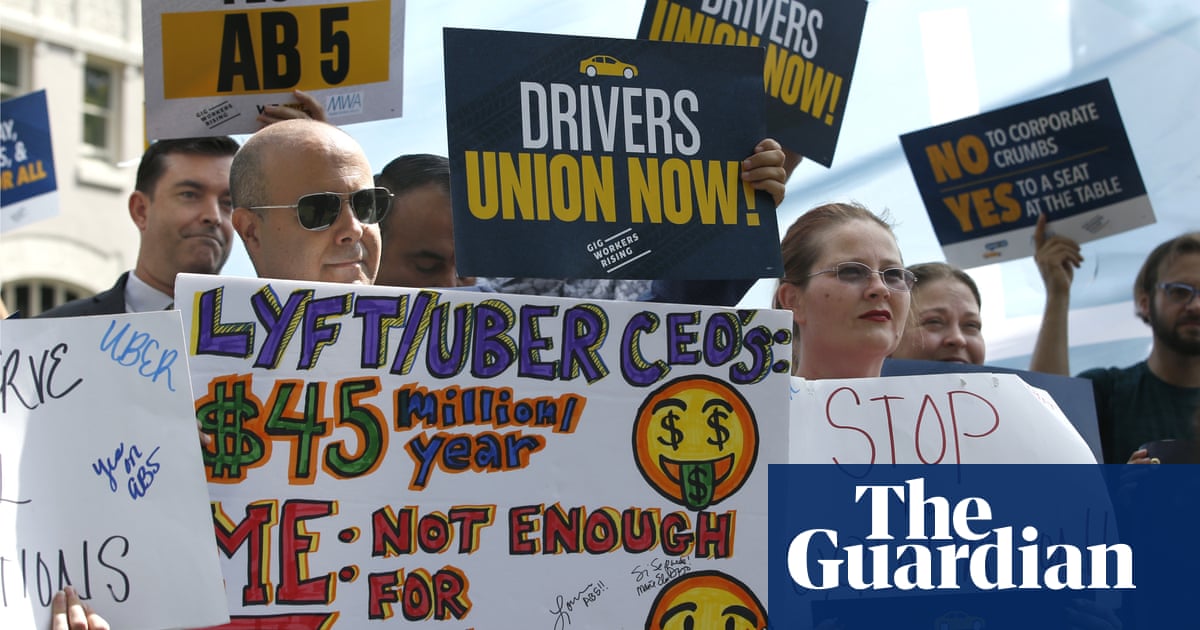 The bill, known as AB5, paves the way for workers in the so-called gig economy to get holiday and sick pay and has garnered attention across the US and beyond, largely owing to the size of Californias workforce. Its passage positions California to be the national leader on this critical issue, Steve Smith of the California Labor Federation said.

Misclassification is not something that just happens in California, it happens everywhere, he said. The trend towards cheating workers out of basic protections has been accelerating in recent years. We think this is significant for us here in California, but its national significance cannot be understated.

Several Democratic presidential candidates have supported the measure, including the US senators Elizabeth Warren of Massachusetts, Bernie Sanders of Vermont and Kamala Harris of California.

Trade groups and gig economy firms that rely heavily on contractors have sharply criticized the bill. Uber said in a phone call with reporters on Wednesday it will seek to avoid reclassifying drivers as employees under AB5.

AB5 does not automatically reclassify any rideshare drivers from independent contractors to employees, Ubers chief legal officer Tony West said. AB5 does not provide drivers with benefits, nor does it give drivers the right to organize. In fact, the bill currently says nothing about rideshare drivers.

We are fully prepared to take this issue to the voters of California to preserve the freedom and access drivers and riders want and need, the ride-hailing company Lyft said in a statement.

Meanwhile, Uber and Lyft have proposed a potential ballot referendum that could be presented to California voters next year and would exempt drivers for ride-hailing services from the scope of the bill.

Uber, Lyft and the delivery firm DoorDash, which has also made freelance drivers the backbone of its business, earmarked $90m (73m) for a planned November 2020 ballot initiative that would exempt them from the law. Labor advocates say that initiative is likely to fail.

This ballot measure is a bullying tactic pushed by Uber and Lyft to oppose the legislature in its final days, Smith said. We dont think that is going to fly.

San Francisco-based DoorDash, expressing its disappointment at the vote, said it was committed to a new law that would guarantee benefits and protections, including a minimum wage, for its delivery drivers.

AB5, which was sponsored by the California assemblywoman Lorena Gonzalez and is supported by the California governor, Gavin Newsom, passed the state senate with 29 votes in favor and 11 votes against. Newsom is expected to soon sign the bill into law.

By approving AB5, the California legislature solidified our states position as the national leader on workplace rights, setting the standard for the rest of the country to follow, the California Labor Federation said in a statement.

California is the most populous US state and is a leader in establishing policies that are adopted by other states.

The bill would codify a 2018 California supreme court decision in Dynamex Operations West Inc v superior court, that set out a new standard for determining whether workers are properly classified as independent contractors.

Under the new bill, companies will have to complete an ABC test to classify workers as contractors, proving they are (a) free from the companys control, (b) doing work that isnt central to the companys business, and (c) have an independent business in that industry. If workers dont meet all three of these standards, they will be classified as employees and entitled to benefits including unemployment insurance, health care subsidies, paid parental leave, overtime pay, and the guaranteed state minimum of a $12 hourly wage.

The extent to which AB5 will actually affect wages of drivers and other contract employees remains to be seen, said Veena Dubal, an associate professor of employment law at UC Hastings College of Law. In the past, Uber has been able to preclude itself from class action suits, making it difficult to force legal change on the company at a large scale.

It has the potential to have a huge impact, but the devil is really in the details here in terms of enforcement, Dubal said. We arent going to see change overnight we may not even see it for a year. Unions and companies all over the world are watching to see what happens next.