Great fanfare as Uber gets its stock on the road, but app stalls in New York

Could this be the moment the sentiment on Wall Street turned against the tech sector? 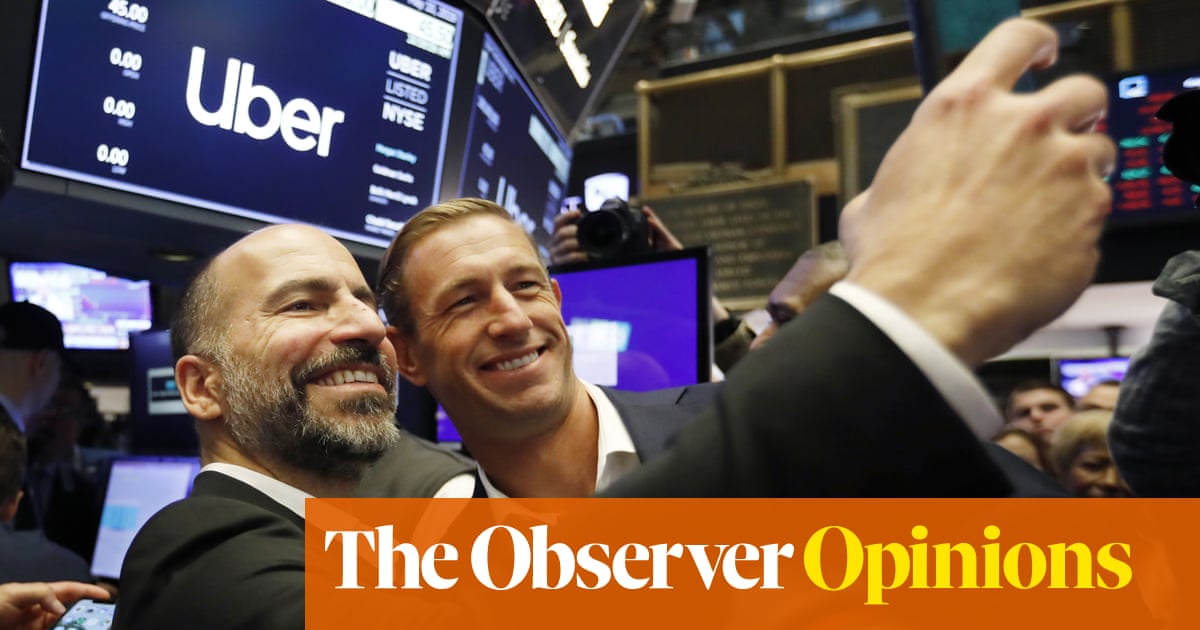 Ubers stock market debut came with all the usual razzmatazz of a big American technology IPO. The chief executive spent weeks making sweeping statements about how the business was just getting started and had new worlds to conquer everything from pizza delivery to international freight. In the background, investment bankers whipped up buyers for the transportation stock of the 21st century.

And, when the big day arrived on Friday, company executives rang the bell to open trading on the New York Stock Exchange while bagels were delivered to traders on the floor. All textbook stuff. Yet Ubers arrival as a public company felt flat. It also had an end-of-an-era tone.

The obvious problem was a share price that immediately went into reverse. Priced at $45 a share, valuing Uber at $80bn (61.4bn ), the stock opened at $42 and closed at $41.51. True, the taxi-hailing app firm turned out to have picked a poor day to list the wider market was fretting about trade wars but such factors were meant to have been priced in beforehand. Bankers had muttered that Uber was priced conservatively, which, by the fan clubs yardstick, it had been. At the start of the process, there were dreams of a $100bn valuation.

Some of the Ubers existing shareholders will not have been impressed. The IPO document showed the company was raising funds privately at $48.77 three years ago. Buyers at those prices will have expected a fat IPO profit from their supposedly go-go, upwards-only, tech stock. They didnt get it.

Therein lies the sense that sentiment has shifted. Google floated as long ago as 2004 but the modern tech IPO era really started with Facebooks debut in 2012.

After the passage of seven years, it would not be surprising if some overdue scepticism and a realisation that not every tech company can be the next Facebook or Google has set in.

With Uber, there were multiple reasons to be cautious. The stock was priced at slightly more than seven times last years revenues of $11bn, a multiple that might be justified if those revenues were about to double and double again. However, Uber grew revenues at 42% in 2018 thats fast, but not shoot-the-lights-out fast.

At the same time, operating losses were $3bn last year and the prospectus warned that Uber would aim to reduce driver incentives, meaning top-up payments, to improve our financial performance. That process of squeezing the drivers does not sound easy.

The well-publicised complaints from a minority about poor pay and working conditions are getting louder and are being heard by politicians. If drivers, currently contractors, had to be classed as employees, that alteration would fundamentally change our business model, and consequently have an adverse effect on our business and financial condition, said the prospectus. Thats one hell of a risk factor.

Wall Streets appetite for such bet-the-farm gambles may not be limitless. Office rental company WeWork is waiting in the wings with a pitch that is reinventing office blocks as places of productivity, innovation and connection, just as Uber reimagined the boring activity of booking a taxi as igniting opportunity by setting the world in motion. Top marks for hype, but it would not take much for sentiment to turn and for investors to decide that the financial returns were less impressive.

Never underestimate the willingness of investors to keep inflating a bubble, but these things always end. In most cycles, theres usually an event that is later seen as the moment when the mood soured. Ubers IPO, the day investors valued a loss-making taxi app at $80bn, could be the one.

For long-suffering civil servants at the Department for Transport, last week must have felt like deja vu all over again as Stagecoachs lawyers came calling.

Barred by the DfT from three rail franchise tenders for submitting non-compliant bids, Stagecoach launched a legal action at the 11th hour, just before Dutch state-owned Abellio signed a contract to take over the east midlands route.

Students of rail history will draw a line between last weeks contretemps and the west coast franchising fiasco in 2012. In the latter, Stagecoach and business partner Virgin battered the DfT into ripping up First Groups contract award.

Once again, these street-tough private operators are highlighting the parlous state of the franchising system. The consequences, however, could result in commercial players being shunted into the sidings.

It is, remember, only 18 months since transport secretary Chris Grayling was doing all he could to keep Virgin Trains East Coast, another Stagecoach and Virgin Group joint venture, on the rails. Grayling even went so far as to draw up plans for a new, bespoke racket, the East Coast Partnership, before the franchise exploded.

The latest face-off, over the deficit in the Railways Pension Scheme, doesnt bode well for privately operated rail franchises. One could argue that Stagecoach and other operators should not have to underwrite a 7.5bn deficit that was not of their making. But if this is another example of risk that the private sector will not take on, then it further undermines the rationale for non-state involvement in the railways.

The industry is rapidly concluding that franchising has been fatally crocked. The latest, all-encompassing industry review, by former British Airways boss Keith Williams, is poking at structures that arent so much creaking as tumbling.