I took a ride with Uber’s most influential driver 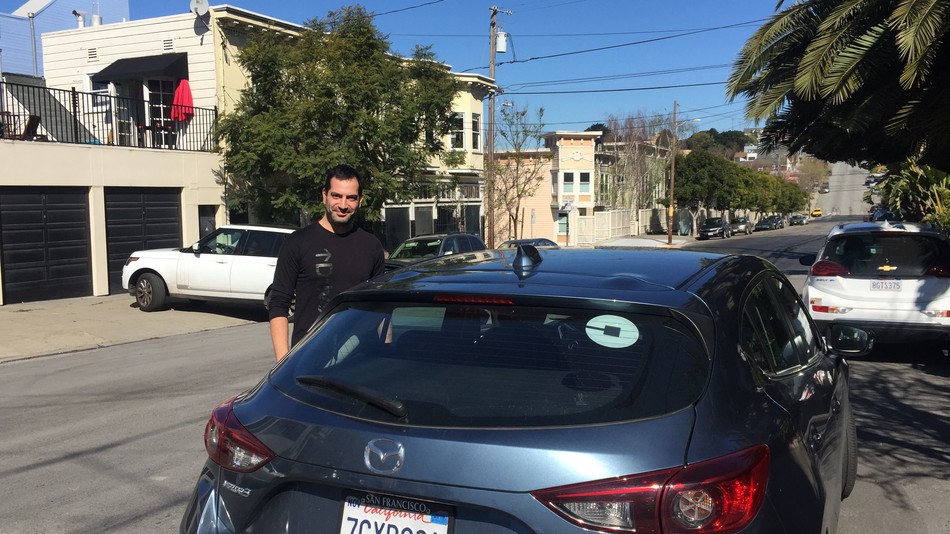 Daniel Danker, head of driver product at Uber, goes for a ride as a driver.

Uber’s head of driver product is proud of his 96 rides (and no tickets … so far).

Daniel Danker knows they’re nothing compared to the thousands of rides some drivers have under their belts. But every rider he drops off helps him understand the Uber service — and provides more insight than anything he’d get from a feedback survey or second-hand notes.

So a few times a month, he opens the separate Uber driver app and cruises around San Francisco for a few hours, picking up passengers, earning tips, and making chitchat with riders in the backseat of his Mazda station wagon. (He lets them know he’s an Uber employee and not a regular driver.)

It seems straightforward, but there’s a lot to take in as a driver. Last week I rode along with Danker for over an hour. We picked up four different passengers on UberX trips and made $24 (not including tips and before expenses like gas, insurance, and maintenance).

The take-home average hourly wage for UberX drivers is about $13, according to driver resource site Ridester, which considers data from lower-earning states like North Carolina and Texas. Another thing to keep in mind: Because Uber drivers are independent contractors, they don’t get benefits, like health insurance or sick pay.

Still, millions of people have chosen to drive for Uber. On our drive, Danker seemed amused when a rider walked into his Uber car wearing a Lyft sweatshirt. Another guy was drinking coffee outside at a parklet and didn’t seem to mind walking a few feet to a nearby loading zone.

I saw for every ride that comes in, drivers are bombarded with information including the rider name, rating, pick-up location, and type of ride (it could be an UberX or Uber Pool), and are forced to make a quick decision on whether to accept or decline the ride. If you’re in a city with Uber’s driver reward program, you could also get more info like where the rider is headed.

Then you need to get the rider to the destination as efficiently as possible, choosing between Uber’s map, Google Maps, or Waze — all while following traffic laws and keeping your eyes on the road. Once the passenger buckles in, he said, you learn to pick up whether someone wants to chat, sit in silence, or listen to the radio. Danker says he’s noticed people are pretty modest when it comes to saying if they’re hot or cold.

The driver app also has a heat map showing where you can earn more or are more likely to get a ride request. It also has a profile that shows your driver and Uber Eats ratings, as well as your acceptance and cancellation rates.

Last year after Uber CEO Dara Khosrowshahi came onboard (and hilariously sucked at driving), Uber overhauled its driver app. So now it more clearly shows your earnings breakdown, including how much you earned, what the rider paid, and Uber’s cut. Despite all the information, some drivers want to know even more. In the UK, a group of drivers is demanding all the data Uber has on them and their rides.

Here in the U.S., it gets pretty detailed. For one of the rides during my ridealong, Uber showed it lost 32 cents. Drivers here may be earning money, but Uber is still working out how to make a profit. Last year, it lost $1.8 billion. In its IPO filing earlier this month, Uber competitor Lyft listed nearly $1 billion in losses.

Danker said drivers mostly care about earnings and flexibility, so he wants the app and driver experience to be focused on those things, whether it’s how to make more money efficiently through promotions and “quests” (which are basically reward incentives for activities like picking up three riders in a row), or through data reports and targeted experiments showing what times of day to drive and where.

After examining the driver data, Danker said he found that the more people drive, the more their driving rating improves, presumably as they get more comfortable with the app and driving experience. Myths about more exposure worsening your rating only hurts drivers, he said. As for Danker, he stays above a 4.70.

“I care a lot about my rating,” he said.

And it goes both ways — he won’t pick up riders with low ratings since he knows that’s a major red flag and could come back to hurt him.

The app isn’t perfect — and Danker knows that. Improvements like more voice control are coming to make using the app less distracting.

Drivers are encouraged to give feedback, which goes to the driver team and is scrutinized for bugs and patterns. Danker says driver forums can also be useful to flag problems. Even if it just seems like one squeaky wheel, others probably have a similar gripe.

When he talks to other drivers he says there’s “instant mutual respect that happens,” as they realized he’s walked in their shoes and isn’t just a suit looking at spreadsheets from on high. But drivers often remind him that the number of hours he’s put into driving are nothing compared to a driver who depends Uber for their livelihood.

Danker mostly uses his IRL insights to change the app, but it also influences experiments and trials for new or modified features. He’s experienced Uber Express Pool in rush hour. He’s had to deal with a forgotten cellphone in the backseat. He drove on Halloween. And after every ride, he emails the team about what he’s learned.

“I want to get out there and get a feel for it,” he said.

The typical Uber user isn’t very familiar with the separate driver app. So Danker had to get behind the wheel to realize the way Uber was notifying drivers about tips was confusing and buried. Now tip notifications come front and center on the app as soon as the rider pays.

Danker says new VP hires at the company usually come along for a ride with him to see what it’s like from the front seat and not the passenger seat, which is how most people interact with the service. (Uber competitor Lyft has a similar program for executives.) You see things differently when you’ve had to experience getting a car inspected at an Uber hub, or finding a place to use the bathroom during an eight-hour shift, or how long 2 minutes can feel while waiting for a passenger.

A big takeaway: the drivers really work for the riders, not for Uber. It’s the riders who tip and affect driver ratings. Uber the company feels like a distant presence. 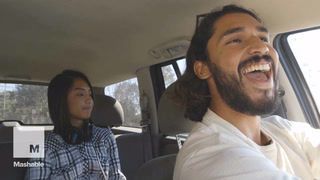