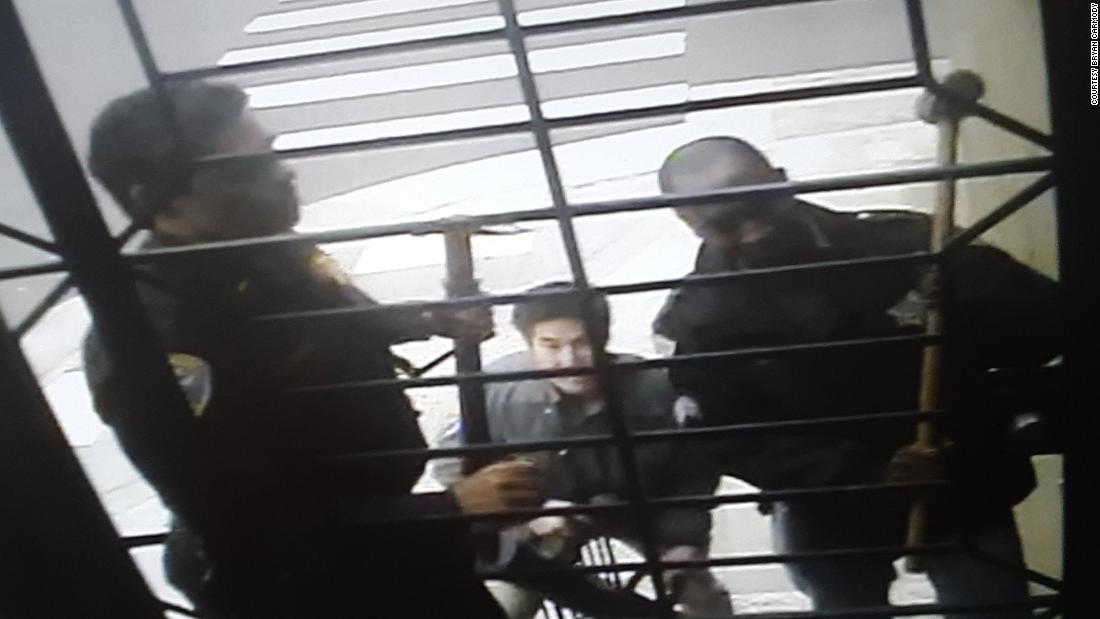 (CNN)Bryan Carmody was sleeping Friday when he woke to the sound of San Francisco police officers breaking down his security gate with a sledgehammer.

For the next seven hours, Carmody said, he was handcuffed as officers seized his computers, cameras, phones and notebooks. Officers also searched Carmody’s office away from his home. While he wasn’t arrested, Carmody said officers gave him no indication of when his equipment would be returned.
“They took every digital photo I’ve ever taken, even family photos,” Carmody said. “Basically, at this point, I’m out of business.”
Carmody said in his 29 years of being a journalist, nothing like this has ever happened to him.
The raid of Carmody’s home came after an April 11 conversation with officers in which Carmody refused to tell authorities how he obtained a confidential police report that included information about the February death of prominent San Francisco public defender Jeff Adachi, according to Carmody’s attorney Thomas R. Burke. Carmody told officers he could not divulge his source, he said Monday.
Adachi, 59, was known for his dogged criticism of the police department, according to CNN affiliate KPIX-TV. The coroner’s office, KPIX reported, said Adachi died from a mix of alcohol consumption and cocaine.
Police refused to release the report or details behind Adachi’s death, CNN affiliate KPIX reported. Police said releasing such details would “endanger the safety of a witness or other person involved in the investigation, or … endanger the successful completion of the investigation or a related investigation.”
Despite the police department’s reluctance to release investigation information, details were leaked and made their way into news reports.
“The notion that I was running around hawking this (confidential police) document is wrong,” Carmody told CNN. “The documents were part of a story, I sold a story. I give stations a heads up, that’s how our agreement works.”
Carmody also said that his reporting and distribution of the story did not arise out of any political agenda or a grudge against the city of San Francisco or its police department.
His attorney demanded in a statement Monday that police return “these improperly seized materials, or, at a minimum, not review any materials.”
“There is no conceivable basis here for the SFPD to claim any ‘exigency’ exception to bypass these well-established protections for journalists like Mr. Carmody,” Burke said.
Burke said he spoke with a San Francisco officer twice Friday and to the department’s spokesperson Saturday. He says he hasn’t received a response from the department concerning the return of his client’s possessions. He did, however, reach out to the city’s district attorney’s office and was told the city’s top prosecutor had not reviewed any search warrants executed at Carmody’s home or office, he said.
Burke said if the department doesn’t return Carmody’s possessions by Tuesday, then he’ll “seek relief from the court.”

Police: ‘We are committed to maintaining the public’s trust’

The San Francisco Police Department issued a statement Monday saying the search warrant was granted by a judge and done as part of a criminal investigation into the “illegal release of the confidential Adachi police report and subsequent sale to members of the media.”
“The citizens and leaders of the City of San Francisco have demanded a complete and thorough investigation into this leak, and this action represents a step in the process of investigating a potential case of obstruction of justice along with the illegal distribution of confidential police material,” the statement read. “We are committed to maintaining the public’s trust, investigating any allegations of misconduct and holding those responsible for such acts accountable.”
The Electronic Frontier Foundation, a nonprofit that advocates for civil liberties in the digital age and is based in San Francisco, also released a statement through David Greene, the organization’s civil liberties director and senior staff attorney. Greene said the police department’s statement fails to address the illegality of its search warrant.
“California law has an absolute ban on the use of a search warrant to obtain materials in possession of a journalist,” Greene said. “So when a warrant is used to obtain materials from a journalist, our first thought is that is against the law.”
Greene added there are no exceptions no matter the investigation.
“That a judge signed the search warrant means either the judge made an error or maybe the police did not inform the court that the person was a journalist,” he said.

The Society of Professional Journalists Northern California chapter (SPJ NorCal) and the Committee to Protest Journalists, an independent, nonprofit organization that promotes press freedom worldwide, both released statements condemning Friday’s raid.
“California’s Shield Law protects journalists from being held in contempt for refusing to disclose their sources’ identities and other unpublished/unaired information obtained during the news gathering process,” SPJ NorCal said. “That this search was carried out weeks after Carmody declined a request from San Francisco police to divulge his sources shows an alarming disregard for the right to gather and report on information.”
SPJ NorCal’s statement also said that while there may be questions around the reporting of Adachi’s death, “the seizure of any journalist’s notes or other reporting materials sets a dangerous precedent.”
“An attack on the rights of one journalist is an attack on the rights of all journalists,” the statement read. “San Francisco’s wrongful actions against Carmody threaten fundamental journalistic freedoms which are vital to a functioning democracy.”
The Committee to Protect Journalists “called on authorities to immediately return electronic devices, documents, and other seized property.”
Carmody on Monday expressed his gratitude to his supporters.
“The outpouring of support that I’ve gotten from friends and colleagues and people I don’t know — big reporters that I would never cross paths with,” he said. “It’s just really nice to have these people reaching out and supporting me and its helping me get through this.”