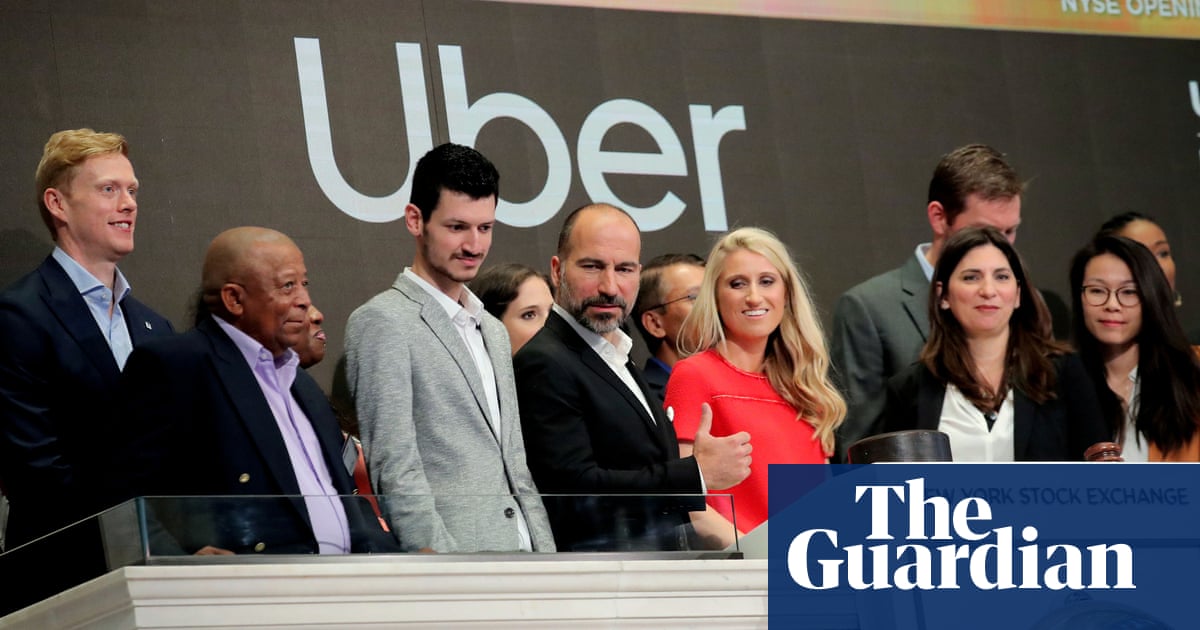 Ubers hopes of a surge in the price of its shares have fallen flat, as investors gave the taxi-hailing apps eagerly anticipated stock market float a frosty reception by sending the shares below their launch price.

Uber put a price of $45 on its shares valuing the company at $80bn (61.4bn) well below the $100bn it had once hoped to achieve amid jitters among investors at the lacklustre performance of shares in rival Lyft since its recent float.

Early trading data from Wall Street showed its shares were quickly changing hands at below the opening price in early trading, dipping about 7% to about $42 against the backdrop of a stock market suffering its fifth consecutive daily decline amid trade war fears.

By the end of its first day of trading, Uber shares had dropped to $41.57, down 7.6% on its opening price, with a market cap of $69.7bn. The stock continued to drop in after-hours trading.

Despite its limp start to life as a public company, the $8.1bn that Uber raised means its stock market debut was still one of the largest in US history and the most closely-watched in the tech world since Facebook hit the market in 2012.

The companys chief executive, Dara Khosrowshahi, was on stage for the traditional ceremony of ringing Wall Streets famed opening bell.

Ubers cofounder Travis Kalanick, who resigned after a string of scandals relating to the companys corporate culture, was on the floor of the exchange. He is still the largest individual shareholder with 6.7% of the business, worth more than $5bn.

As trading commenced, shares in the company quickly slid, a start that will be viewed as disappointing given the hype around the company, although they recovered slightly by lunchtime.

The performance is thought to have been affected by the dismal flotation of Lyft. The smaller rivals shares have been in steady decline, losing 25% since its float at the end of March. Lyft also lost ground on Friday, falling by more than 7% by mid-morning before recovering slightly later.

Investors may also have been wary of the fact that Uber has never made a profit and warned in its investment prospectus for the float that it may never do so. Last year it made an operating loss of $3bn. The company said: We have incurred significant losses since inception, including in the United States and other major markets. We expect our operating expenses to increase significantly in the foreseeable future, and we may not achieve profitability.

Khosrowshahi urged people to judge the success of the float in three to five to 10 years, not on Monday, adding that it had been a difficult day to launch the float given market concerns over the re-emergence of US trade tensions with China.

By issuing 180m new shares at $45bn, Uber raised about $8bn to fund its growth plans, including a multi-billion dollar investment in driverless cars.

The listing also meant that a select group of early investors, including the Amazon boss, Jeff Bezos, and the drugs cheat cyclist Lance Armstrong, have made billions of dollars between them because the value of their investments has now been crystallised.

Some have also sold shares to new investors, cashing in on their investments, some of which were made when the company was valued at less than $1bn.

Despite Ubers slow start, analysts at the Los Angeles based investment firm Wedbush said they expected its share price to rise in the longer term to $65, which would value the company at $118bn.

They said: The brand loyalty of Uber is hard to dispute as the company continues to attract drivers and consumers illustrating an impressive formula to go after a $5.7tn opportunity globally on transportation which swells to $7-$8tn when including third-party food delivery and freight/logistics.

Jordan Hiscott, the chief trader at ayondo markets, said Uber may have been too ambitious in its valuation target. He said: I find it intriguing that investors would want to participate with this valuation as high as $82bn, while still being a loss-making company.

Admittedly thats in the extreme short term and for balance I actually find the company interesting on a longer term basis mainly for its ability to harness the gig economy while also changing how we view and use automobiles for transport.

Lastly the IPO felt a tad rushed, with general financial market conditions not ideal for such a highly priced listing at the moment. Perhaps there was a reasoning that given the potential headwinds later in the year, now was as good of a time as any.